A recently published Open Access article represents the first demonstration that the plasma levels of miR-107 might represent a useful personalized diagnostic biomarker of prostate cancer since its levels are increased in plasma from prostate cancer patients compared with control subjects using two independent cohorts. The results provide new, compelling evidence supporting the contention that miR-107 represents a promising diagnostic, prognostic, and/or therapeutic tool, worth to be further explored, in the pathological association between prostate cancer and obesity. 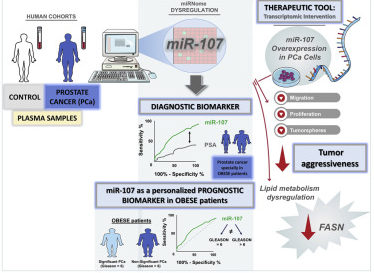 Prostate-specific antigen (PSA) is the gold standard biomarker currently used for prostate cancer screening, but has several limitations, such as the lack of specificity and sensitivity. Therefore, there is an urgent need to develop new tools to diagnose prostate cancer earlier and better.

MicroRNAs (or miRNAs) are small single-stranded non-coding RNA molecules that function in RNA regulating gene expression. MicroRNAs have emerged as potential sources of non-invasive diagnostic biomarkers in several pathologies, as they can be analysed in plasma, and obtained from a simple blood extraction.

In this study, whose results were recently published in Molecular Therapy – Nucleid Acids, the team assessed for the first time, the dysregulation of whole plasma miRNome in prostate cancer patients. They also studied its specific implication in obese patients with prostate cancer (body mass index > 30).

The publication concludes that the study represents the first demonstration that the plasma levels of miR-107 might represent a novel and useful personalized diagnostic and prognostic biomarker of prostate cancer, and especially so for obese patients.

Furthermore, towards the objectives of the ProsCanGO project, an in silico analysis revealed the association of miR-107 with the splicing process, a process responsible for the maturation of RNA. The study revealed that miR-107 overexpression in prostate cancer cell lines altered the expression of key splicing process associated genes. This suggests an alteration of this cellular mechanism. Since the oncogenic splicing variant of the ghrelin hormone, the In1-ghrelin, is overexpressed in prostate cancer, the alteration promoted by miR-107 on the splicing process could alter In1-ghrelin expression.

The study was led by the IMIBIC group GC27 OncObesity and Metabolism in collaboration with several clinical units of the Reina Sofia University Hospital, namely Urology, Lipids and Atherosclerosis, and Endocrinology and Nutrition, as well as with researchers of the Spanish Biomedical Research Centre in Physiopathology of Obesity and Nutrition (CIBERobn) and the Department of Cell Biology, Physiology and Immunology of the University of Cordoba. André Sarmento-Cabral gave support to the study design and helped with the data analysis and interpretation, and the manuscript writing and revision.