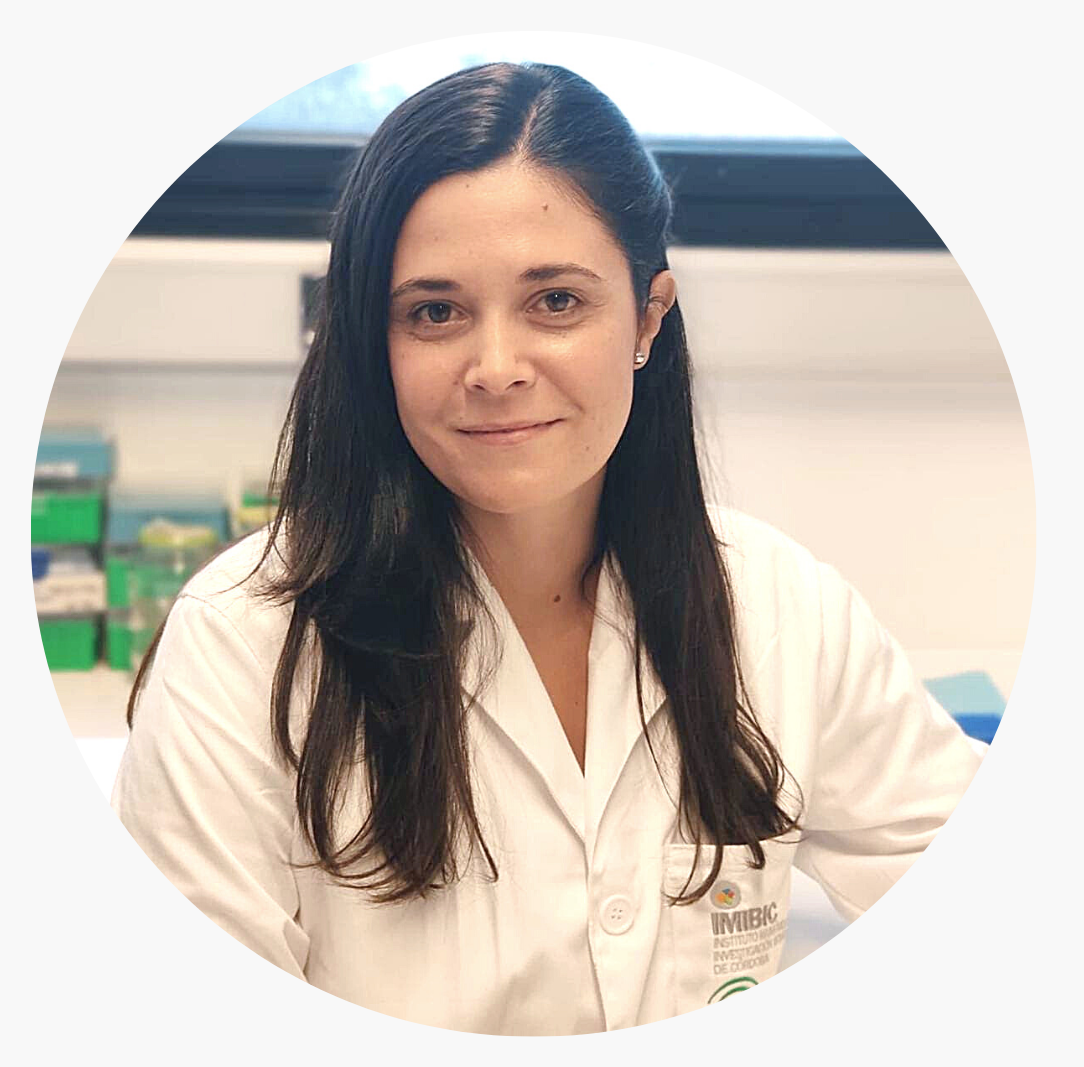 Maribel Martínez Macías (PhD) is a member of the IMIBIC group GC22 Epigenetics, under the supervision of the group leader Prof. Teresa Roldán. Her project is titled GLIOCHEM – Repair of temozolomide-induced DNA damage in tumour cells: role in glioblastoma resistance to chemotherapy. This project aims to generate new knowledge on the molecular mechanisms involved in resistance to temozolomide, a DNA methylating agent used in the treatment of several types of cancer including glioblastoma (brain tumour). Moving towards personalised cancer therapy, the expected results include the identification of new therapeutic targets and predictive biomarkers for methylating anticancer treatment. Maribel’s project will last from January 2021 till December 2023.

Glioblastoma (GBM) is an aggressive form of brain cancer with a low survival rate, due in large part to resistance to temozolomide (TMZ), a DNA methylating agent used in combination with radiotherapy as first-line treatment after surgery. The major lesion induced by TMZ is methylated guanine (N7-meG), which is frequently lost from DNA creating toxic abasic sites (AP sites). AP sites are repaired through a Base Excision Repair (BER) pathway initiated either by AP endonucleases or by AP lyases. It is generally assumed that AP endonucleases play a major role, but the contribution of AP lyases to TMZ-resistance remains largely unknown. Furthermore, unprocessed AP sites may generate single- and double-strand DNA breaks, channelling repair through alternative, BER-independent routes. Since DNA repair mechanisms contribute to TMZ resistance and are epigenetically regulated, tumour-specific DNA repair and epigenetic signatures may be used as predictive biomarkers of patient response to treatment. In this context, in order to move towards personalised therapy in cancer treatment, GLIOCHEM aims to generate new knowledge about the causes of resistance to TMZ in GBM cell lines, allowing the identification of biomarkers than can predict response to treatment and the identification of new therapeutic targets.

GLIOCHEM overall objectives are to study the role of BER-dependent and BER-independent cellular pathways in TMZ-induced methylated lesions and to identify epigenetic biomarkers than can predict response to TMZ. The following specific objectives will be addressed:

Objective 1. Analyse the correlation between resistance to TMZ in GBM cell lines and levels of DNA methylation, expression and activity of DNA repair proteins. Objective 2. Examine DNA repair capacity and transcriptional response in TMZ sensitive and resistant GBM cell lines. Objective 3. Study the synthetic lethality of TMZ in combination with topoisomerase I and RNA polymerase I inhibitors. 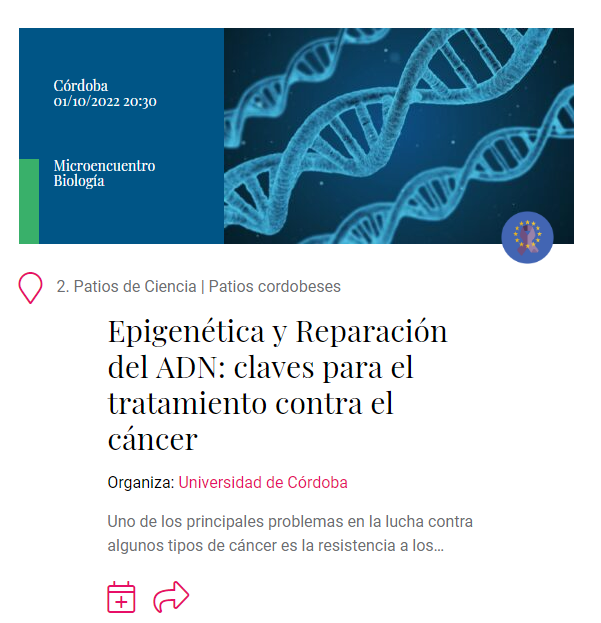 One of the main problems in the fight against some types of cancer is resistance to chemotherapy-based treatments.

Recent advances highlight the importance of epigenetics and DNA repair in cancer treatment. The aim of this event and discussion between researchers and citizens is to convey the need to generate new knowledge by doing basic research in order to advance in the fight against cancer.

This event has been sold out!

Maribel Martínez and her Supervisor Teresa Roldán visited two local high schools to explain their research of epigenetics and DNA repair as part of the activities of the International Day of Women and Girls in Science. The activity was organised by the Unit of Scientific and innovation Culture of the University of Cordoba (Unidad de Cultura Científica y de la Innovación-  UCCi). 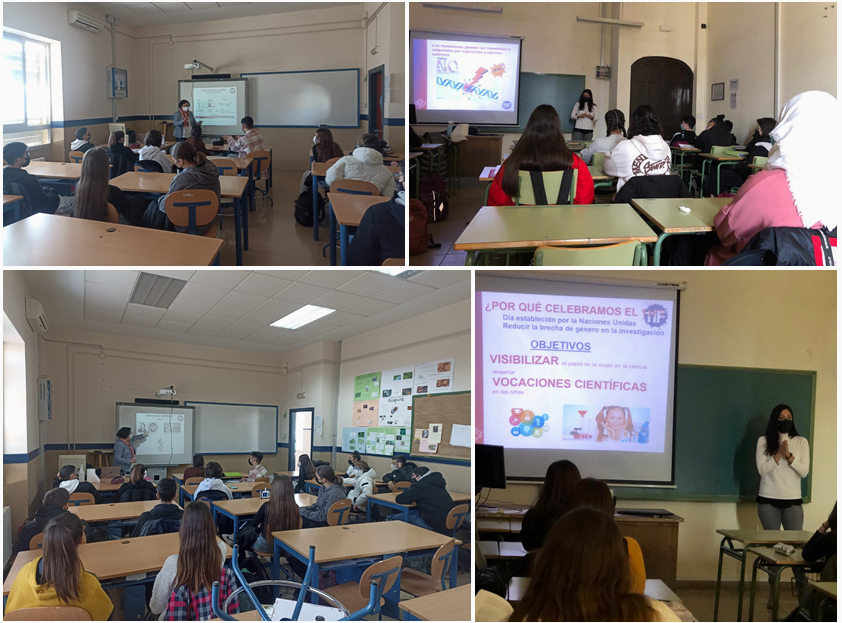 UCO BioResearch Seminars (UCO-BRS)  is an Interdisciplinary seminar series where researchers from different departments are invited to give a talk about their work.

Maribel Martínez Macías presented her project on Friday 18th of March, under the title: “DNA damage responses in neurodegeneration and cancer” 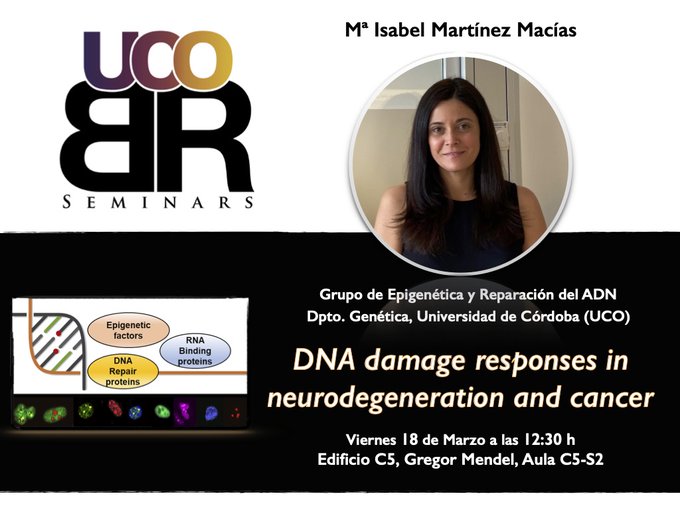 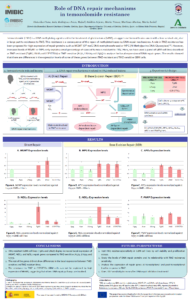 Role of the phosphatase PNKP in temozolomide resistance